Too Big for Toronto?

Mirvish and Gehry have big plans for the King West area.

Talk around the town is that David Mirvish may be aiming his sights too high. At least too high for current infrastructure to support.  Architect Frank Gehry, well known for his Guggenheim Museum Bilbao, has a strong history in Toronto and wants the towers to reflect the past, present and future of this city.  The designs are unique and without a doubt will add character to the King West neighbourhood, as they include a new 60,000 sq. ft. art gallery, and new OCAD campus.  But in an already crowded neighbourhood, with it’s existing traffic snarls, adding a few 85 storey towers may just tip the scales.  The real issue is who will pay for the infrastructure upgrades that will almost certainly need to precede this development. Toronto has a history of low property taxes, always lagging behind the burbs, but the rising impact of new Toronto condos on the downtown core may be the catalyst for the kind of change to property taxes Torontonians have no appetite for.  In a city that already can’t afford it’s services, and has plans for transit expansion which it can’t currently afford, one may wonder who will foot the bill. 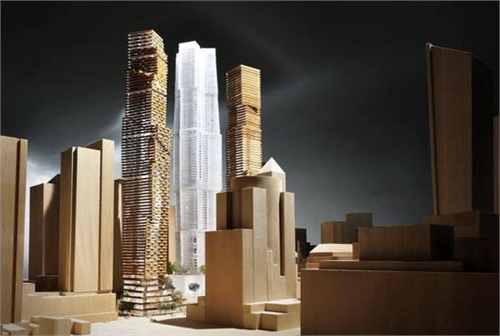