VIP
1% Listing
Map Search
Sign In
Back
Condominiums.caBlogThere is a mountain on top of that condo building!

There is a mountain on top of that condo building!

Did this wealthy Chinese businessman really think he could build a mountain on top of the condo building he lives in?  Really?  Some things just boggle the mind and this is one of them. Zhang Biqing, an obviously wealthy Chinese businessman, has built what looks like a small oasis in the sky.  It has rocks placed to look like a small mountain, dense greenery and of course a swimming pool.  Obviously the other occupants of the building complained saying the pool was causing floods, the construction was noisy, he didn’t have permission to build and the buildings structural safety was in jeopardy (perhaps he should have invited the other occupants to one of his many noisy parties filled with famous people).  The authorities have summoned the man, so we will have to wait and see what will become of what is dubbed “Beijing’s most outrageous illegal structure.” 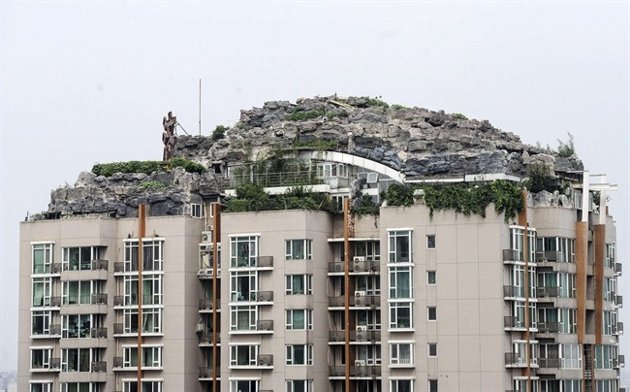